Register now and receive 2% discount on your first order automatically! 4

How may we help you?

Cookie preferences
This website uses cookies, which are necessary for the technical operation of the website and are always set. Other cookies, which increase the comfort when using this website, are used for direct advertising or to facilitate interaction with other websites and social networks, are only set with your consent.
Configuration
Technically required
These cookies are necessary for the basic functions of the shop.
"Allow all cookies" cookie
"Decline all cookies" cookie
Amazon Pay
CSRF token
Cookie preferences
Currency change
Customer-specific caching
Individual prices
PayPal payments
Selected shop
Session
dmCountryChanged
dmReloadAfterCountryChanged
Comfort functions
These cookies are used to make the shopping experience even more appealing, for example for the recognition of the visitor.
Note
Statistics & Tracking
Affiliate program
Google Analytics
Newsletter2Go
Track device being used
Shipping to Germany
Categories
Information 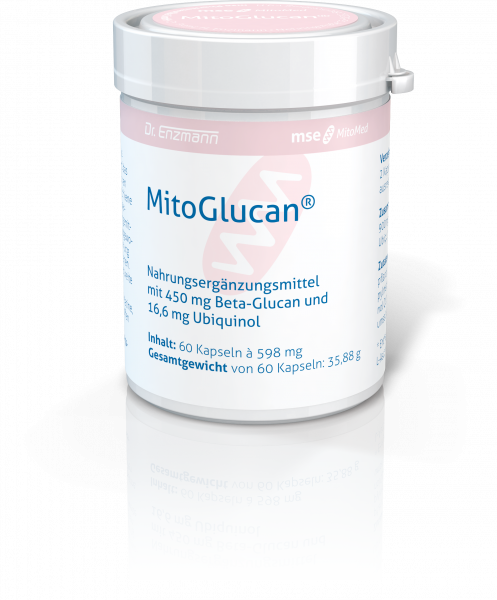 Do not exceed the specified recommended daily intake. Food supplements should not be used as a substitute for a balanced and varied diet.

Store in a cool, dry place, away from light and out of the reach of small children.Lot number and best before date: see bottom of can.

If you have any questions regarding the product please contact us. As many other products in our store you can order this one by simply calling us!

Beta-glucans are found in the cell walls of yeast, cereals, fungi and bacteria. They are long-chain glucose molecules strung together, which have different properties depending on the linkage between the glucose building blocks. The beta-glucan contained in MitoGlucan® comes from the baker's yeast Saccharomyces cerevisiae and consists of β-1,3- and β-1,6-linked glucose molecules.
It is produced in Germany and the yeast is cultivated only on malted barley, hops and water before it is subsequently broken down with the yeast's own enzymes and the beta-glucan is purified (Yestimun® from Leiber).

Our body has no enzymes to break down beta-glucans, so they pass more or less unchanged through the gastrointestinal tract and are therefore counted as dietary fiber. Only some species of bacteria in our intestinal flora can use beta-glucans and other dietary fibers as a food source.

Never miss any of our regular offers with our VIP-Newsletter!

This website uses cookies, which are necessary for the technical operation of the website and are always set. Other cookies, which increase the usability of this website, serve for direct advertising or simplify interaction with other websites and social networks, will only be used with your consent. More information
Decline Accept all Configure